The CPU has to be able to send various data values, instructions, and information to all the devices and components inside your computer as well as the different peripherals and devices attached. If you look at the bottom of a motherboard you’ll see a whole network of lines or electronic pathways that join the different components together A system bus is a single computer bus that connects the major components of a computer system.

All communication between the individual major components is via the system bus. The bus is merely a cable that is capable of carrying signals representing data from one place to another. The bus within a particular individual computer may be specific to that computer or may (increasingly) be an industry-standard bus.

If it is an industry-standard bus then there are advantages in that it may be easy to upgrade the computer by buying a component from an independent manufacturer which can plug directly into the system bus. For example, most modern Personal Computers use the PCI bus. 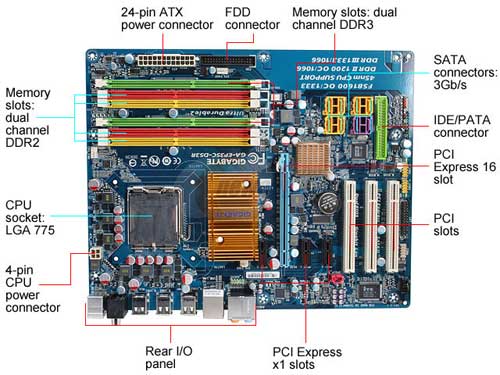 A computer’s bus can be divided into two different types, Internal and External. The Internal Bus connects the different components inside the case: The CPU, system memory, and all other components on the motherboard. It’s also referred to as the System Bus.

After this study, we can divide the system bus into three types. These are as follows:

Now let’s discuss all of the above three types of bus in brief :

Data is stored, manipulated, and processed in system memory at various locations. System memory is like a large sea of information full of fish (data). Our computer has to move information in and out of memory, and it has to keep track of which data is stored where.

The computer knows where all the fishes are, but it has to transmit that information to the CPU and other devices. It has to keep a map of the different address locations in memory, and it has to be able to transmit and describe those memory locations to the other components so that they can access the data stored there. For example, a system with a 32-bit address bus can address 232 (4,294,967,296) bytes, or 4 GB, of memory. Early processors used a wire for each bit of the address width. For example, a 16-bit address bus had 16 physical wires making up the bus. As the bus becomes wider, this approach becomes less convenient and more expensive to implement.

Instead, some modern processors make the address bus faster than the data bus and send the address in two parts. For example, a 32-bit address bus can be implemented by using 16 wires and sending the first half of the memory address, immediately followed by the second half.

A data bus may be time multiplexed to serve different functions at different times. At any time only one gate may drive information onto the bus line but several gates may receive it. In general, information may flow on the bus wires in both directions. This type of bus is referred to as a bidirectional data bus.

There are two types of data bus; they are address bus and a data bus. The data bus transfers data and address bus transfers information or address about where the data should go. A bus which allows data to be transferred faster, which makes applications run faster. The local bus is of high-speed that connects directly to the processor. Many military systems are compatible with the 1553, but most new commercial systems are not. This system is used for command and telemetry transfer between military spacecraft components, subsystems and instruments, and within complex components themselves.

The ISA architecture which is also developed by IBM is used for defector standards and is widely used for high performance. Thus, the main function of the data bus is to connect the ‘system to external devices. There are many types of data bus, which can connect the PC to the mobile and other external devices in order to download software. Thus data bus is a medium that transfers data from one place to another.

The control bus carries commands from the CPU and returns status signals from the devices, for example if the data is being read or written to the device the appropriate line (read or write) will be active.